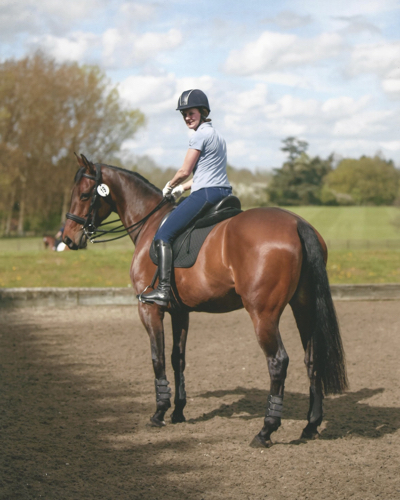 This is the third of our five part series on riders who have qualified for the Wendover Heights Equine CT Rider Winter Dressage Championships 2017 with Dressage Anywhere. We meet Cassilda Courtier-Dutton and Flicka who have qualified at Elementary and Medium levels.

How did you hear about Chiltern and Thames Rider Magazine membership and how long have you been a member?

I've know about Chiltern and Thames for some time as my daughter used to be a member, but I joined when I realised that I could qualify for their championships through Dressage Anywhere.

How did you hear about Dressage Anywhere?

I heard about Dressage Anywhere from Lucinda, part of the DA team, when I used to keep my horse at livery in a stable opposite her horse Lindo.

Tell us a bit about your horse

Flicka is an Irish Sports Hores and we compete at Elementary and Medium in dressage and Discovery British Show Jumping. I've had Flicka since she was just 4 and she is now 11, so 7 years this summer.

To do well at the CTR Championships and the other Championships we have qualified for (British Dressage Combined Training, Petplan Elementary and Medium and the British Show Jumping 2nd Rounds in British Novice and Discovery). To establish a good flying change so that we can compete at Advanced Medium and for me to be brave enough to jump at BS Newcomers.

Tell us something we might not know about you

I bought Flicka for my son, but he lost interest in eventing and now plays polo instead. I never planned to compete Flicka, but once we started we got the bug, especially as she has done so well! Flicka isn't so keen on dressage but loves her show jumping and hunting in the winter. She is a very easy going, kind horse and always tries for me. I'm so lucky to have her as she is my dream horse.